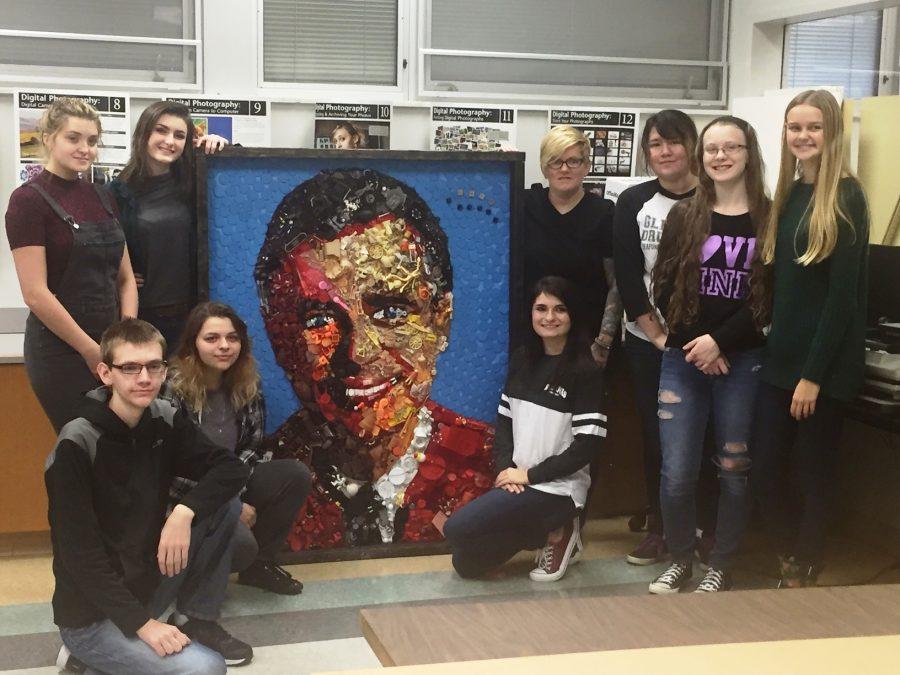 At the senior high a new piece of art was added to the famous art collection but it wasn’t purchased or voted upon by the school. This art was student made. Before the project began Mrs.Mack, an art teacher at the high school, chose a local artist and business owner named Amy Soich, a graduate from Greater Latrobe Senior High. Amy Soich owns Tattitude, a tattoo shop in town. The two met  on a field trip for National Art honor Society. Amy’s career and her unique mixed media vision of art prompted Mrs.Mack to invite her to do a residency. “A long time ago before I even met her, I went to a show she had at the museum in Ligonier. She sort of stuck in my head because she taught herself how to weld and I thought that was pretty cool, I thought it would be something the class would be interested in,” said Mack. The artist-in-residency has been a special opportunity at the high school for 12 years. An artist comes in for a certain period of time and does a group project with that class. In the first few years of Mack’s career, she would take a group of students out to Pittsburgh to work with Associated Artists of Pittsburgh. Amy Soich and Mack met a few times and talked about possible project ideas. Mr. Rogers just happened to come up and they both agreed on it. “Once she came up with the idea, I sort of wondered how it would come about and I did some research on assemblage sculptures but she did give me the basics,” said Mack. “I was a little nervous between having the image and then having it be successful with all that stuff because that’s totally out of my comfort zone”, said Mack.  The portrait of Fred Rogers that is five feet by four feet is made of wood, and many “found” objects – mostly small toys and other things. The small objects and toys were brought in by the class. The giant Fred was was actually painted before all the pieces were attached with hot glue, which helped to place the pieces in the correct places.  “So seeing you just jump in and you’re such a quiet subtle group, and seeing you take on each step like no big deal and even though you didn’t really talk to each other you all sorted things and placed things and played around with it I was really kind of in awe of the whole thing it was really fun to watch”. It was really important for the group of eight students to work together to get the project done quickly and efficiently.The whole project took a little over 3 weeks. “So everyday when you would work on it I would take a picture and say WOW! And it just got better and better, as a teacher it was really a cool learning experience”, Mack said. Rachel Garbeglio, a student in the portfolio prep class, had said, “It was really cool but it looks so different up close than far away”. Recently Greater Latrobe Senior High had their annual Art Gala on, November 3, 2016, which brings the community together to see the art and Fred’s portrait was on display as well. Laney Crozier, Fred’s sister even attended the gala. She got to sit next to the portrait of Fred, “It was spot on” she said.

Fred’s future is looking very bright. He’s going to hang at the high school indefinitely but he’s going to be traveling to several places. He’s going to be on display for a little at Saint Vincent College in their Fred Rogers Center, they have a whole section that was archived for him. This will take place in either the winter or the spring. It isn’t official but Fred may go on display at the Latrobe Art Center for a short period of time for their Fred Rogers Celebration they have every year and so far this is all he has lined up for the future.