Skiers and Boarders battle for the best powder 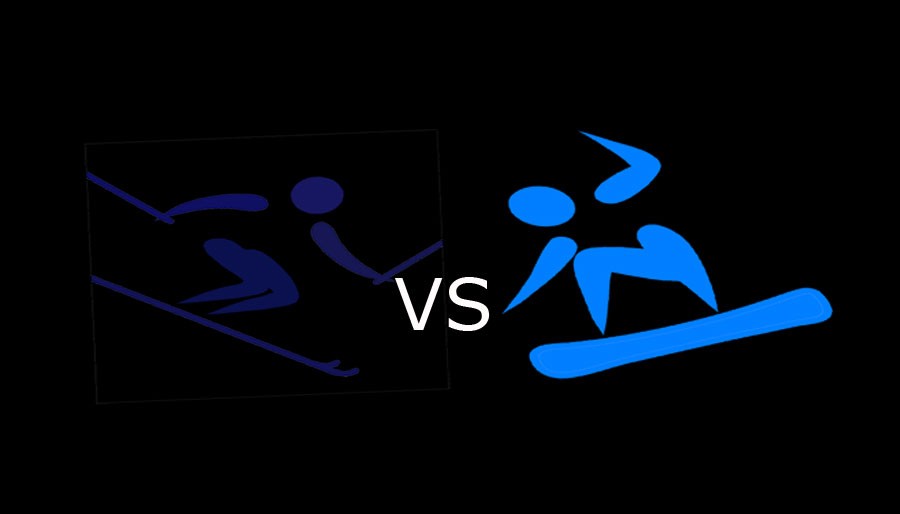 As the first snowstorm of the season gets closer, snowboarders and skiers get more and more hyped.
The first snowfall of the season is an exciting time for skiers and boarders. Most of them will try to get out onto the slopes as often as possible.
Winter is not the only time that they can cruise down the slopes. Liberty Mountain Snowflex Centre is a resort in Virginia that allows snowboarders and skiers to board or ski year-round. It uses a synthetic material that simulates the snow’s slip and grip. It creates the thrill of real snow.
Skiing is what most people will begin their career with in the snow-based sports. Skiing is when you have one foot on its own little board and you also have two poles in your hand. People suggest starting with skiing because some people are more comfortable looking straight ahead rather than with a snowboard you are sideways. Also with skis you have better balance because you can spread your legs apart and bring them back together freely which is completely different than snowboarding again.
A little bit of rivalry exists between snowboarders and skiers according to senior Gina Kovacevic “Some snowboarders are lazy and just sit in the middle of the slopes which is an inconvenience to other passing skiers and boarders,” said Kovacevic.
Senior Nick Kernicky agrees with that statement to an extent. “Some older people actually do dislike boarders because skiing was the original way to do things. Now I think most everyone else just jokes about not liking each other,” said Kernicky.
Certain resorts in the west only allow skiing for that same reason that Kernicky had mentioned that it was the original way to glide down the slopes.
Kovacevic offers advice for new skiers or to anyone who has thought about trying it. She said, “Wear a helmet. Always.”
Kernicky mentioned that Hidden Valley is is a good place for for a beginner because it is smaller. As for intermediate skiers he recommends Seven springs because it is bigger and overall more advanced.
Snowboarding is what people will usually switch over to after they get used to skiing. Snowboarding is when both feet are strapped to one board and they are about shoulder width apart. Snowboarders have to go down the hill sideways and they also do not have the same balance as skiers.
Senior Tanner Shaffer did not start with skiing he went straight to snowboarding and he does not regret it. “It was hard at first but once I got the hang of it I loved it,” said Shaffer. Tanner also believes that there is no rival in either sport both groups are just going to enjoy themselves going down the slopes the way that they choose to. Sophomore Olivia Gerard agrees with Tanner saying there is no rivalry between the two boarders.
When resorts do not have enough snowfall accumulation in the area they them make their own snow and the artificial snow is not as good as fresh snow according to Olivia Gerard. “It’s a lot nicer to ride down especially if it’s freshly groomed or not touched that’s the best because the snow is so soft and not slushy or icy,” said Gerard. Most boarders prefer Seven Springs for a local resort because it is much bigger than Hidden Valley and it has more variety.
Some at Latrobe that do both ski and snowboard. Charlie Robbins junior is primarily a skier but every once in a while he will ride the snowboard down the slopes. Charlie said, “Skiing was easier to learn hard to master and snowboarding was hard had to learn but once you got the hang of it you’re pretty much good.”
Senior Keith Findle also does a little bit of both. Findle started off as a skier but when he became twelve he decided to try snowboarding. “Skiing is easier to pick up than snowboarding but once you get the basics for snowboarding down then it’s easier to learn new things,” said Findle.
At one point a rivalry between snowboarding and skiing many believe existed, but now it is just a sarcastic rival within friends according to both Findle and Robbins. They also agree with others that fresh snow is much better than artificial or icy/slushy snow.
“I like just gliding down the slope on fresh snow because it is soft and not a big slushy mess,” said Findle.