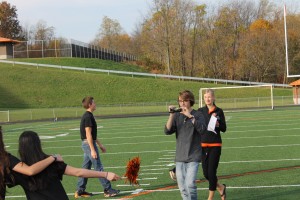 Lip dubbing has become a viral trend in high schools across the country. TribLive holds an annual contest between high schools for the best Lip Dub video. “The purpose of the Lip Dub is to showcase school spirit,” said Broadcast teacher Mrs. Houck. It is made by filming individuals or a group of people lip synching while listening to a song or any recorded audio then dubbing over it in post editing with the original audio of the song. It appears like the people in the video are singing the song.

The schools who sign up to participate must choose one of 15 songs preselected by the contest host. “Don’t Stop Believin’” by Journey was Greater Latrobe’s Lip Dub song this year.

On Tuesday, October 28, the school district took the entire first period of the day to create a lip dub. This is the first school year that the filming took place during school hours and it is also the first year that the entire school participated in the event.

The lipdub isn’t filmed entirely just for fun. The video will be submitted into the contest  to compete with several other high schools in Western Pennsylvania. The video that receives the most votes will win a grand prize of $2,500. According to the Trib’s website, schools only compete against schools of similar sizes. Latrobe falls into the Large category with over 1,000 students.

Filming took place in two of the facilities new to the high school this year: Arnold Palmer Field House and Rossi Field. Given that the video must be shot in one take, this makes filming with many students and a large area quite difficult. “It was a great opportunity to showcase the new facilities,” said Houck.

Greater Latrobe’s broadcast crew was behind filming the Lipdub. WIth a project like the Lip Dub, a large amount of preparation was needed. Brianna Marshall, a junior in Broadcast said “We traced the entire route of the Lip Dub onto the field. We made the timing of the lyrics accurate with where the camera would be.” Caleb Czuszak, junior, filmed all three takes of the Lip Dub this year.

“It makes me feel like I’m a part of something greater than myself,” said Junior, Sidney Ruffner. Every club, team, and social group was represented in the lipdub. The students were organized into their categories and arranged throughout the field and the field house. Every student on the field had a prop specific to their group. The wildcats that were not on the field were stationed in the stands of Rossi Field. To end the video, all the students gathered in the stands and chanted “I believe that we will win.”

The winner of each category will earn a special check presentation by current Pittsburgh Power owner Lynn Swan.