A Veteran who I look up too 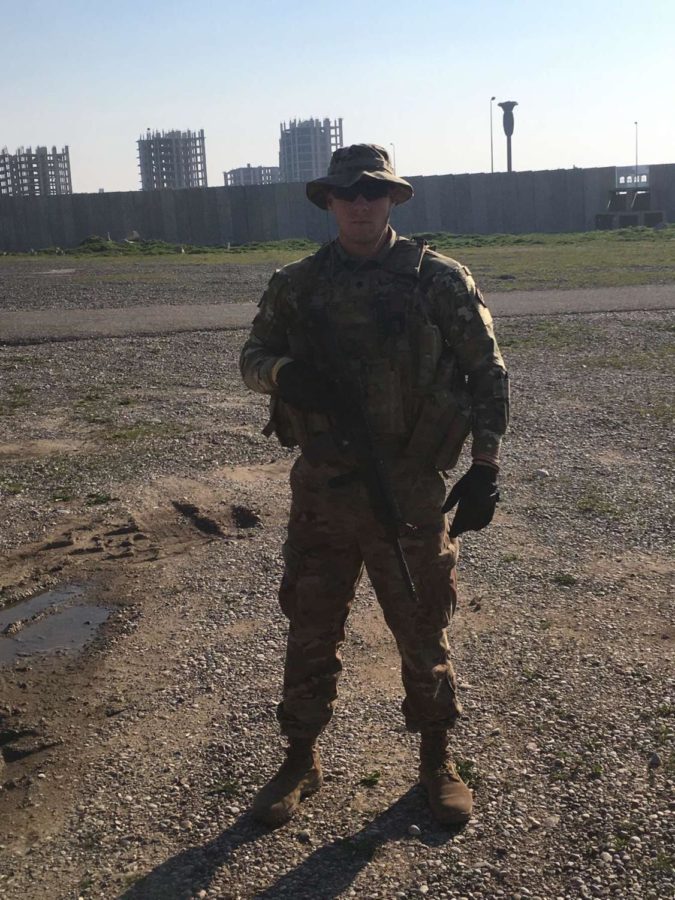 November 11th, 1938– the holiday for those who sacrificed more than just their lives for us. 83 years later, and we still pause our lives to remember the fallen soldiers who died and the ones who heroically lived on to tell the story. This day is supported by all–sports teams, businesses, franchises, etc. A day where we can agree that today’s only priority are Veterans and active service members. This is a day where we can all support our family, friends, uncles and aunts for the heroism they showed and still continue to show.

My brother, Joseph Reed, is a war veteran who is an inspiration to all who hear his story and a sibling who I will always look up to no matter how old I am. Joe served in the Army Reserves as an engineer for six years and was honorably discharged at the age of 22 with his whole life still ahead of him. He has been an inspiration not only to me, but to my other siblings as well. I could not be more proud of Joe; the army brought him some hardships but also opportunities for a new life where he could see the world as he wanted too.

As Veterans Day approaches, it makes us think about the veterans themselves and everything they have accomplished and sacrificed throughout their service years. Putting their life on hold and missing out on all the normal everyday luxuries of home life makes you question–was it all worth it?

As a sibling who loves each of her brothers and sisters dearly, I look up to Joe so incredibly much. He has been through more than many can imagine and I could not be more proud of him.He has always wanted to join the Army, and always had ambitions of serving in the army. Ever since he was little, he loved being outdoors playing with airsoft guns and loved pretending to be a soldier. Years later, he put in the work and his dream came true. He worked out for over 2 hours everyday no matter the time and ate very healthy, consuming lots of protein. He started off being very skinny, then began taking copious amounts of pre-workout and caffeine, which helped him workout everyday for 2 hours in the gym, training to fulfill his dream.

My older brother joined the army when he was only 17-years-old and never once looked back. The Army brought him some of the best friendships but also the hardest griefs he has ever had to endure before. It brings a sense of the loneliness of being away for so long but also the gratification of it all being worth it, especially after reuniting with your family.

“Being away definitely sucked. Seeing your friends partying and having a good time sucks but you know you’re doing good in the world and you are doing it for a good cause,” stated Joe when describing his time overseas.

He even talked about how it is very difficult to get used to life after you come home from  deployment. “You’re home but you don’t feel at home- almost like two identities that can’t get used to each other. They try so hard to work together and act as normal as possible with the mixing of two lives but in reality it doesn’t and takes lots of time.” Joe talked at length about this as just one of the many difficult mental struggles that he had to cope with when adjusting back to civilian life.

“The army is great because it teaches you discipline, especially on deployment. You create amazing bonds with these guys and on deployment you spend every second of every day together,” said Joe.

The army gives you bonds you can never forget, but it also gives you side effects you don’t really want to talk about.

The traumatic experiences you see on deployment are things that mentally and physically tax a person’s brain. “The worst pain is losing a friend you deployed with to suicide. 22 veterans a day commit suicide and when one of your friends you spent a whole year living with does, it’s gut wrenching,” said Joe.

This is what the army doesn’t prepare you for. They prepare you for losing your life or watching someone else die, but not suicide. 13.5% of all deaths of suicides were from Veterans not knowing how to live with the pain of what they went through.

Imagine your best friend, who you have spent everyday with for almost over a year, does not get the same welcome home you did because they didn’t make it. How do you ever get over that, or more importantly how do you ever not feel the need to blame yourself. In the reality of it all, it’s not your fault at all but how do you explain it to someone who has no idea what you are talking about? Veterans can be traumatized with things they saw and find it difficult to explain that pain to people who do not have that shared experience. That is yet another example that shows just how brave they actually are.

Every veteran around the world has a different experience when it comes to their years spent in the service. We want to give you the world from all the pain and suffering you had to endure. We want to thank you for risking your lives for people you don’t even know just for the wonderful country we call home. Veterans Day is a day filled with tremendous emotion. So thank you, Joe–and Rae and Sam…and all the other veterans who sacrifice their lives for the sake of others.