The Cast Of Radium Girls Lights Up The Stage 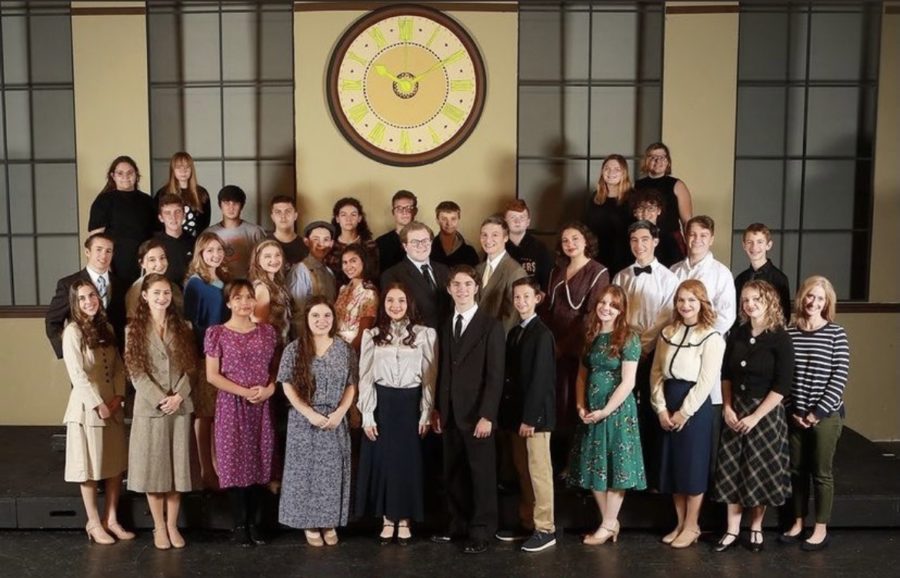 In 1926, radium was a miracle cure, Madame Curie an international celebrity, and luminous watches the latest rage—until the girls who painted them began to fall ill with a mysterious disease. Inspired by a true story, Radium Girls traces the efforts of Grace Fryer, a dial painter, as she fights for her day in court. Her chief adversary is her former employer, Arthur Roeder, an idealistic man who cannot bring himself to believe that the same element that shrinks tumors could have anything to do with the terrifying rash of illnesses among his employees. As the case goes on, however, Grace finds herself battling not just with the U.S. Radium Corporation, but with her own family and friends, who fear that her campaign for justice will backfire. Written with warmth and humor, Radium Girls is a fast-moving, highly theatrical ensemble piece. Called a “powerful” and “engrossing” drama by critics, Radium Girls offers a wry, unflinching look at the peculiarly American obsessions with health, wealth, and the commercialization of science.

Every time the cast of one of our shows steps out on the stage, it’s breathtaking. The acting, the sets, the emotion; everything is high level. Latrobe’s theater program is the best I have ever seen out of other high schools. The talent in our school is phenomenal and the casts of every play and musical blows me away. There have been many performances that have been amazing, but Radium Girls was nothing short of a masterpiece.

The first thing I noticed was this enormous clock that illuminated the dark auditorium with a purple and green light. It was the perfect way to symbolize the limited time the women had in the show and it blended into every scene and set perfectly, and what amazing sets they were. They were very simplistic with elevated platforms on wheels and a few pieces of furniture, yet it flowed so nicely. That is also thanks to the stage crew who kept the show moving with their efficiency. They worked quickly and never made it feel like a long wait. Along with the stage crew, the lighting technicians contributed to the feel of the show. Every scene had the lighting perfect for the moment. The appropriate amount of spotlight when it was focused on two people, or one, in an intimate scene made it as if they were the only people in the world. The lighting was especially impressive during a dream sequence when it was flashing green and purple. This, paired with the ticking clock sound effect, made for an amazing and captivating scene. But of course, what really made every scene magical was the actors.

I already stated my opinion on the acting abilities of the cast, but I can’t say it enough, they’re astounding. Every single person in the show drew you into the story. In fact, what speaks volumes about their skills is that I didn’t even recognize some of my own friends because I couldn’t even see them as anyone but their character. There was not one actor who did not do a great job, but there were a special two that undoubtedly sold their performances and left everything on the stage. One of these people was Neehla Pal, who played Grace Fryer, the lead female role. Neehla is a natural performer. Being a dancer and being in other shows, she is no stranger to the stage, but this performance in particular was perfection. Her emotion was so real and genuine. I believed she was Grace and it was her life. She connected with her character unbelievably well, it was the most suitable role for her talent. There were multiple scenes where I got chills from her emotion and passion. She was impossible to keep your eyes off of. The other actor I would like to commend is Ben Federico. He played the male lead, Arthur Roeder. Ben certainly has his fair share of leads and phenomenal performances, and this one was no different. Every time I watch him on stage, I feel like I’m watching a professional production. His maturity allows him to play this older character extremely well and make it believable. I forgot multiple times throughout the show that he is one of my fellow peers. The way he portrays this role is remarkable. Like Neehla, Ben connected with the character like it was another part of himself. He was born to perform. It was so natural and left many people, including me, in awe. Watching the two act together was truly a sight to behold. The power they radiated into the audience had goosebumps all down my arms. I cannot wait to see more of these two.

Another important factor in making this show as good as it was, was the chemistry between the cast. Watching everyone play off of each other’s energy and emotion was astonishing! As a group, they absolutely did the story justice with their skill. Two people I believe had undeniable chemistry was Ben Federico and Lily Haverly. Lily played Arthur’s wife, Diane Roeder. With her and Ben’s individual talent, they came together and had what was, in my opinion, the strongest chemistry in the cast. It was stunning to see how naturally they played their roles.

Overall, this show was a wondrous and magical experience. Our drama program is outstanding and I’m at the edge of my seat waiting for the next show these gifted people bless us with. I cannot wait to see them all hit the stage again.