Asian Americans at Risk Of Hate Incidents Across the United States 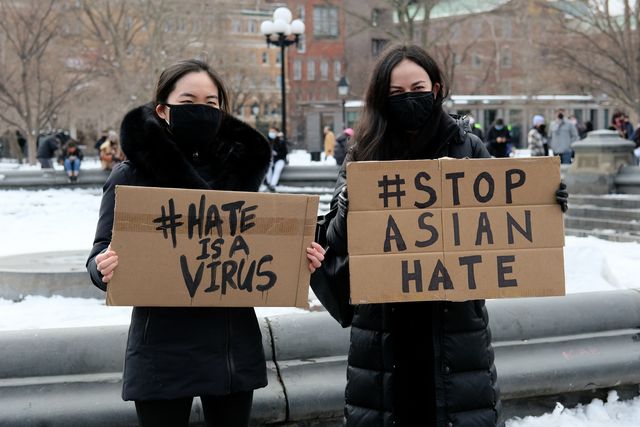 The Issue
Nearly 3,800 hate crimes have been reported against Asian Americans in the past year, according to the organization Stop AAPI Hate. That amounts to just under 11 hate crimes for each of the 346 days included in the report.

In the wake of COVID-19´s introduction to the United States, racism and xenophobia towards the Asian American and Pacific Islander Community skyrocketed. While overall hate incidents dropped by 7% in 2020, crimes targeted at the AAPI community have risen by 149% overall. According to Stop AAPI Hate, women and the elderly are at a particularly high risk for hate incidents.

Asian Americans across the United States are reporting incidences of hate and discrimination, having been spiked by the COVID-19 crisis. American politicians only fueled the fire.

Representative Ted Lieu recently condemned lawmakers including Representative Chip Roy of Texas for associating China with the spread of COVID-19 and therefore setting the example for U.S. citizens that Asians were somehow to blame.

“You can say racist, stupid stuff if you want, but I’m asking you to stop using racist terms like ‘Kung flu’ or ‘Wuhan Virus’ or other ethnic identifiers in describing this virus.” Representative Lieu said.

“I am not a virus. And when you say things like that, it hurts the Asian-American community. Whatever political points you think you’re scoring by using ethnic identifiers in describing the virus, you’re harming Americans who happen to be of Asian descent,” he added.
The severe consequence

On the 17, two elderly Asian people were viciously attacked by a man in San Francisco. 75-year-old Xiao Zhen Xie, one of the victims, donated the $900,000 raised for her to help her community through the AAPI.

That same day, five women in Houston attacked Korean-American store-owner Jung Kim. After being asked to leave, the women shouted slurs at Kim, 59. They returned to the store soon after, repeatedly punching her. Her son, Sungjun Lee, believes the attack was racially motivated, and as of now, two women involved in the attack have been charged.

The Fight
In the past year, government and private groups have worked to document and prevent these crimes. Stop AAPI Hate, a group created last March, began as an agency to collect data about hate incidents against Asians and Pacific Islanders. The group explains, “By identifying patterns and sources of anti-Asian racism, we are better able to support government agencies and community-based organizations that request our assistance. We offer practical solutions and policy recommendations for long-term change.”

The document condemns acts of racism and xenophobia against AAPI citizens and elaborates on the steps to be taken by the federal government and its agencies to combat these incidences of hate.

“My Administration condemns and denounces acts of racism, xenophobia, and intolerance against AAPI communities.” President Biden states in section 1.

Despite the danger they face, AAPI citizens and those concerned for them have fought back against this epidemic of hate.

In Oakland, California, AAPI individuals and allies have formed patrols to ensure the safety of those at risk. One such group, titled Asians With Attitudes, spends 6-7 hours per day patrolling Chinatown, maintaining the safety of citizens, business owners, and those at risk of being targeted.

Our Community-Our Responsibility
Greater Latrobe Senior David An expressed his feelings on what sparked the rise in hate crimes across the U.S.

“I think there is a lot more than Covid to the crimes, but Covid tipped the iceberg.” An said.

Another GLSHS student, sophomore Celina Chen, shared her perspective on the issue. Chen, a small business owner herself with Etsy shop NOONAsTREASURE, takes after her parents, owners of China Garden and Tokyo Sushi & Hibachi. As a first-generation Asian American, her experience reflects young people across the nation.

“The rise of Asian hate crimes has both troubled me and impacted me greatly…my family and I have feared that we might encounter our own form of these crimes or fear that any of our relatives in other states may encounter these crimes as well.” Chen shared.

The young woman further elaborated on how deeply affected she was by the recent shooting in Atlanta.

“I’ve considered talking to my parents about closing the restaurants down for a while for our safety as there were so many Asian hate crimes as close as Pittsburgh, but I couldn’t get myself to do it as our restaurants are our only income and we rely on it,” Chen explained.

She additionally addressed the root of Anti-Asian hate, and the culture surrounding staying silent.

“Hate towards Asian Americans has been around for a long time but was never spoken of because, from an Asian culture perspective, we decided to endure our problems on our own, knowing that no one would help us besides ourselves…The hate toward Asian Americans just continues to get fueled and burned, and COVID-19 was just a huge wind that picked up the ‘fire of hate’ and ignited it within people, causing an even greater whirlwind that caused the short end to many Asian American lives,” she said.

Celina was extremely candid with describing her own experience of anti-Asian sentiment.

“People would often call the restaurants to ask if there are cat and dog meat to sell, and then use the same number to order but never come to pick it up. People have also ordered, picked it up, but came back with half-eaten food and demanded a full refund because they would state that the meat that we have is from cats and dogs. People would also make Asian-or specifically Chinese harassment jokes while eating at the restaurant, but we wouldn’t kick them out because they were our customers,” Chen said.

“All I want to say is that many people do not acknowledge the little things that occur in daily Asian American lives, and it’s also really sad how we as Asian Americans classify those experiences as normal conditions. The realizations hit hard and allowed me to realize what types of experiences I was experiencing and how unfair it was. Even in a small town like Latrobe, Asian Americans experience Asian hate in these forms of racism. I would assume that most of the Asian families in the larger cities would have experienced the same,” she added.

Celina then began to describe a specific incident experienced by a relative of hers.

“I have a cousin in California who just gave birth to a daughter this February. When they were taking care of their restaurant, a car flew into their restaurant from the parking lot. Luckily they were not hurt, but the restaurant was ruined. I cannot classify this “incident” as an Asian American crime, but people have always classified things that were caused by Asian hate as an incident.

Considering those most impacted by the rise in hate crimes are Asian women and the elderly, Chen was justified in expressing her fear for the safety of her relatives.

“I fear. I do fear. I fear for my grandma who lives alone in New York, fearing that someday someone would just push her and she would leave the world. News of elderly Asian American hate crimes occupy social media every other day. And, as usual, we call my grandma every day to check on her. But as the crimes rise, we fear that someday she would not answer our calls and we would get a call from the local hospital speaking of her conditions,” she shared.

“It feels like a big rock has been lifted off of our chest wherever we get to hear her voice over the phone. But as the day goes by, that chunk of rock would be placed on our chests again because we fear and the feeling of fear for our grandma and everyone else in our family is suffocating.”

Celina Chen is just one person, but her experience has deep connections with those of Asians living across the United States. The fear, and pain, and prejudice that she has experienced is truly heartbreaking, and her willingness to speak about her experience proves we as Americans, as Pennsylvanians, as Latrobeans, just need to listen. AAPI members of our community deserve respect, dignity, safety, and peace of mind, and when these basic needs are not being met, we need to reflect on how to do better for them.

Throughout the United States, Asian Americans and Pacific Islanders are being shunned, injured, discriminated against, and killed. America needs to take a stand against this pervasive issue and protect the members of our society being victimized every day.
How You Can Help
We can help the AAPI community by standing up and speaking out, demanding accountability from perpetrators, and offering support to victims. Supporting AAPI-owned businesses and restaurants during this time of heightened racism and xenophobia can make a huge difference in the lives of the AAPI community.

The AAPI Civic Engagement Fund is another charity dedicated to helping “foster a culture of civic participation within AAPI communities by supporting the growth of AAPI groups as organizational movement and power building leaders that achieve specific policy, systems, and transformational change.

Popular crowdfunding Website, GoFundMe, has also created a section of their site designated for #StopAsianHate causes. The site provides links to AAPI organizations through a community fund. There are also cause-specific links, and a section dedicated to supporting those affected by the Atlanta Spa shootings.

Every single American is responsible for standing up against this growing tirade of hate. Stop AAPI Hate advises that we ¨Encourage those who experience or witness acts of hate towards the Asian American and Pacific Islander communities to report an incident at our website.¨ They recommend asking local officials and those up for election what they plan to do to protect the Asian American and Pacific Islander residents at risk in their communities.

This epidemic of hate is harming members of our communities and we need to fight against it.

If not now then when?

If not us, then who?