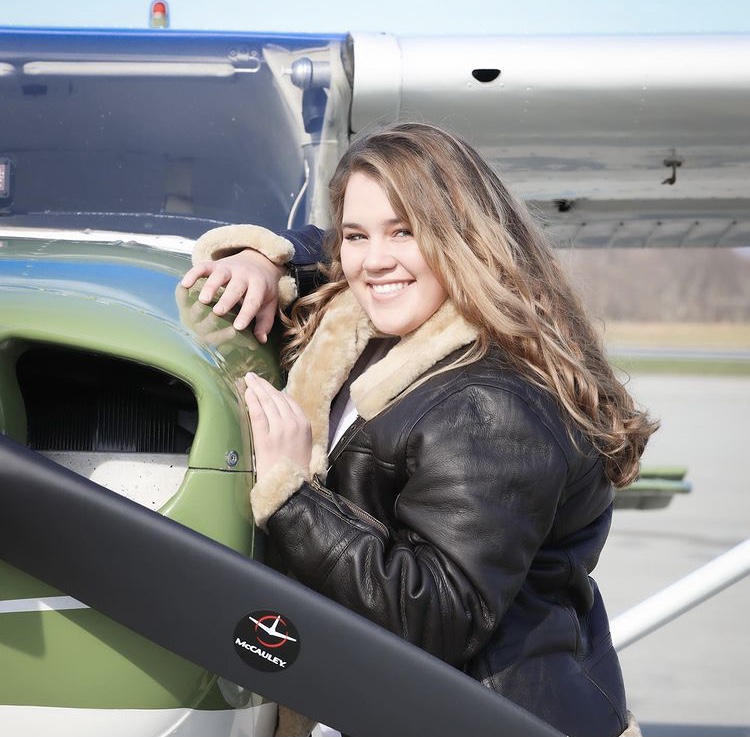 “Between the beautiful scenery and the adrenaline rush, it was one of the more memorable experiences of my life,” Jordan Tallman explained as she took her first flight up in the cockpit. Jordan is a senior at Greater Latrobe Senior High School who has a unique passion: flying planes. Although Jordan’s dad has a career as a private pilot, throughout Jordan’s childhood she was not exposed much to the world of aviation. Just recently, she has become interested in this field and now, at the age of 18, Jordan has finally had the opportunity to experience what her dad has for much of his life.

It all started on the ground, doing lots of bookwork. Although it might not be the most fun part of the process, Jordan said, “It’s important to study in order to have an understanding of the machine and the techniques that go into flying.”

After much preparation on the ground, Jordan was ready to start flying. Her first time in the air was in November of 2020. She flies at Arnold Palmer Regional Airport in Latrobe, PA with instructor Chris Higgins from Laurel Highlands Jet Center.

While many people are scared to fly or can’t wait to get off at their desired destination, Jordan is quite the opposite. She fell in love with flying the first time she took flight. She said, “My favorite part of flying is just being up in the sky. It is such a surreal feeling.” Jordan enjoys seeing the beautiful scenery from a birds eye view. “However, it’s always a disappointment on days that I can’t fly due to bad weather or other factors that prevent me from going up,” Jordan explained.

To much surprise, Jordan and her family have never had the luxury of being flown by her dad. Being a private pilot, his company has strict rules about flying family members.

From commercial planes to private jets, the types of aircrafts are endless. Jordan has been learning to fly a Cessna 172. She adds, “My dad just bought a Piper Twin Comanche, which I will also learn to fly.” The Cessna is a single engine airplane and carries four people whereas, the Twin Comanche is a multi engine airplane and can carry six people. Despite the differences, the controls and cockpit are very similar.

As Jordan got more experience, she was finally ready for her first solo flight in March of 2020, which consisted of flying around Latrobe in the Traffic Patterns.

A few months ago, Jordan was ready for her first solo cross country flight to Clarksburg, West Virginia. She said, “I felt very confident and prepared going into it. I was not nervous at all.”

Through this whole experience, she has said the hardest part of learning to fly is overcoming the failure that comes along with it. Jordan explained, “It takes a while and a lot of practice to become comfortable with the controls and maneuvers. Sometimes it would have been easier to just give up, but I continued to push through.”

Jordan has been working towards receiving her private pilots license and also hopes to have her multi engine rating completed before she goes off to college.

Jordan will be attending Georgetown University next fall to study pre-med. On top of being accepted to such a prestigious University such as Georgetown, they also offered her a D1 scholarship to play softball. Jordan’s position is pitcher, making her a valuable team player. “I decided on Georgetown because I absolutely fell in love with the campus atmosphere, location, and the prestige of the University itself,” she said.

Although she likes to think that she would have still been interested in aviation, having her dad’s expertise in this field had a great impact. Their father-daughter relationship has grown so strong over their shared passion for flying. “He has been a huge influence on me. Flying is something that we have really bonded over,” said Jordan. Surprisingly, Jordan has yet to fly with her dad, but can’t wait for the special moment where they can sit side by side in the cockpit ready for take off.

Jordan Tallman has a tall order ahead of her from continuing her hobby of flying, studying medicine, and being involved with a demanding softball schedule. Finding a balance will allow her to accomplish all that she loves and more. Whether it is looking down from the clear blue sky, hitting the books, or being on the field, Jordan will find success.