The Pandemic’s Impact On Student Athletes 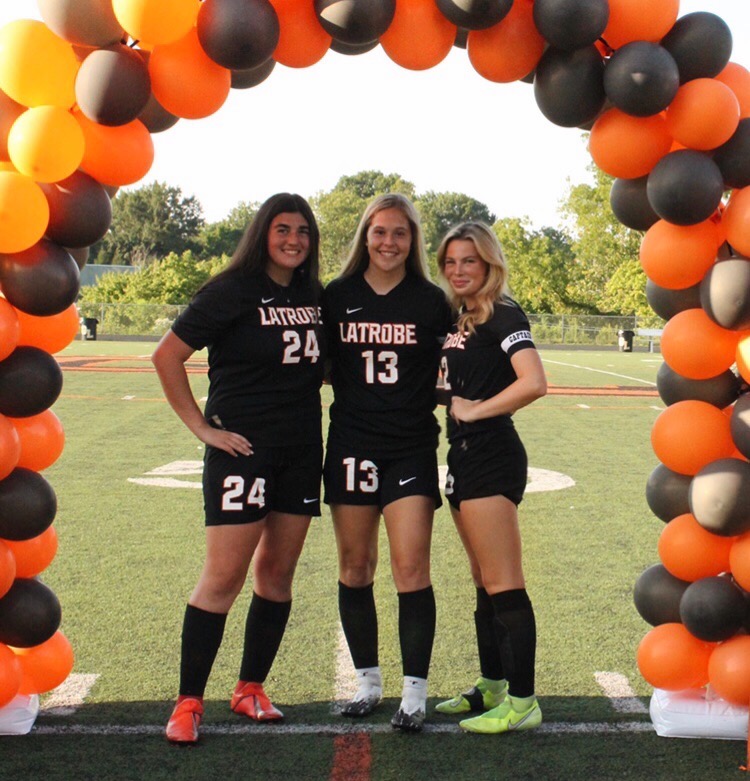 Sanova Henschel, Maddie Delucio, and Hannah Klimek, all senior captains of the girls latrobe soccer team, enjoy their senior night together. The girls started and ended the night off with celebration as the beat their Mount Pleasant opponents 4-1.

On March 13, 2020, our lives changed indefinitely due to the newly discovered coronavirus pandemic. What started out as a normal scrimmage, turned into one that would never be forgotten. The Girl’s lacrosse team was gearing up for their first scrimmage of the season and went on to play unbeknownst to what was about to happen. The girls were lining up to shake hands when their coach announced that they are no longer allowed to do so. Little did they know that this scrimmage would be the first, and only of their season. March 13th was the day that the supposed two-week quarantine was announced and commenced. Little did anyone know that this short quarantine from school and all school activities would turn into a remaining year full of online classes, assignments, zoom meetings, and the cancellation of all spring sports.  While everyone was affected by this pandemic, student athletes not only had to think of the physical ramifications of this disease, but also how it would impact the possibility of not being able to play the game that they love.

As everyone is aware, the 2020 spring sports season came to a screeching halt due to the deadly virus that was rapidly spreading. This was a huge upset to many, especially the senior athletes who never got to finish out their final season on their high school turf.

While seeing the despondency that student athletes were dealing with due to the cancellation, I couldn’t help but wonder if I were going to deal with the same outcome that fall.

The repercussions of the coronavirus that were taken lasted until about mid-summer 2020, when sports were allowed to cautiously hold non-contact practices. This was a huge relief to many, including myself as I realized that I may have a chance to play my anticipated senior soccer season. As mandatory practices began, precautions were taken and followed in order to maintain the athlete’s health and safety. The athletic directors and coaches everywhere fought against their state’s governor and their athletic association, so student athletes could have their fall season. With enough struggle and certain arrangements, they were able to make it happen.

Sports definitely look different this year. Wristbands must be given to spectators in order for them to watch the games, select teams aren’t able to line up on the field when their name is called out, many teams require masks to be worn while not in play, and teams aren’t allowed to give the usual congratulatory high fives at the end of every game. While all schools are doing their best effort to keep case numbers low and follow the precautions, some have unfortunately reached a setback.

For example, Gateway, a local school district, has just seen an increase in case numbers within the past few weeks. The school now has 13 cases of the coronavirus and has been forced to shut two of their buildings down through October 9. This sudden closure has forced the competitive district to cancel football and soccer games. Additionally, schools such as North Allegheny and Elizabethtown have also been affected this school year.

It is comforting to see fall teams not only at our school, but everywhere participate and persevere through these trying times as they all get to enjoy the sport that they love to play. While sports may look different for a while indefinitely, you can be sure that the determination of the athlete’s will not change. This setback has only made them stronger and want to work harder.